DC Comics started life as National Comics, Detective Comics Inc and All-American Comics. Eventually they coalesced into one company named after their popular title Detective Comics, though the "DC" decidedly does not stand for anything anymore (though it is sometimes said to mean "Dynamic Characters").

DC is one of the top two American comic book publishers, along with Marvel Comics. DC's most notorious characters are Superman, Batman and Wonder Woman, though they boast a host of other popular characters. In a long history,it is no surprise they created a few trans and intersex characters along the way, as is evidenced in this category.) 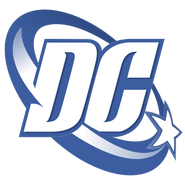