Danny the Street is a comic book superhero in the DC Universe. He was created by Grant Morrison and Brendan McCarthy and first appeared in Doom Patrol. His name is a pun on female impersonator Danny La Rue, as "La Rue" is French for "The Street". Danny is thus a transvestite street.

Brendan McCarthy was involved in the creation of Danny the Street (hence his credit in Doom Patrol) and he planned to bring Danny back in Solo #12 where he would have become a member of the Green Lantern Corps - Street Lantern. The idea never came to fruition.

Danny is an actual street. A sentient and sapient stretch of roadway, he has long served as a home and haven for the strange and dispossessed. A super hero of sorts, Danny does possess several super powers, the most notable being teleportation. He is also able to integrate himself into a city's geography without causing any damage or disturbance; roads and buildings simply make room for him. He does this mostly at night, when no one is looking. Danny travels the globe, and sometimes beyond, happily looking for folks in need of shelter and friendship. Thus, it is possible to turn a corner on the way to work, and find yourself walking down Danny's pleasantly unfamiliar roadway.

Danny is an unusually flamboyant personality. In spite of the fact that most streets are genderless, Danny is male and a transvestite. His sidewalks are lined with various hyper-masculine stores (gun shops and sporting goods, mostly) which are decorated with frilly pink curtains and lace. While Danny cannot speak in any normal sense of the term, he communicates with his residents via such means as signs in windows, type-written messages and letters formed out of manhole vapors or broken glass shards. He speaks English, heavily flavored with Polari, a largely antiquated form of homosexual slang. "Bona to vada," ("Good to see you.") is his favorite way of greeting friends. While it is never fully established as fact, Danny sometimes hints that he was human once. Likewise, it is difficult to tell just how old Danny is. In a clever pun, his personality is based, at least partially, on British drag performer Danny La Rue.

Danny is kind and compassionate, and slow to anger. If pushed past his considerable limits, though, his wrath can be a terrible thing.

Danny first came in contact with the Doom Patrol when he and his residents were attacked by Darren Jones and the Men From N.O.W.H.E.R.E. Jones' obsession with normalcy, and with enforcing his own "50s sit-com" worldview made Danny an obvious target. The struggle took Danny to downtown New York City, where the Doom Patrol investigated the disturbance. They worked hard to protect Danny and his residents, but it was ultimately the members of the Danny the Street Perpetual Cabaret that defeated Jones.

Danny has been a home to many oddities. In addition to the Doom Patrol and the Perpetual Cabaret, Danny housed Flex Mentallo, protecting the oddball hero during a mental breakdown following his first and only failure.

Danny was once able to teleport into the complicated, city-like environment of the Pentagon.

Eventually, Danny left the DC Universe, and inhabited an alternate Earth. Pledging to protect and nurture the needy of all dimensions, he became Danny the World. Danny's friend, former Doom Patrol member Crazy Jane, later became a resident of Danny the World.

In the pages of Teen Titans, during the One Year Later time-shift event in the DC Universe, a portal to Danny was seen in Dayton Manor; Crazy Jane was also seen through the portal.

Danny was later leveled in Doom Patrol #7 by Mister Somebody Enterprises. Crazy Jane managed to escape the destruction and fled to Oolong Island, carrying with her a brick taken from one of Danny's buildings, now carrying all of Danny's sentience, effectively making him Danny the Brick. There, Danny rebuilt himself to Danny the Bungalow and, later, Danny the Island. 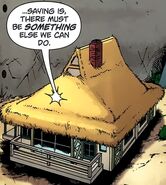 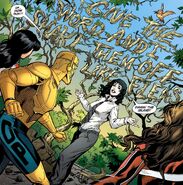 Danny the Island
Add a photo to this gallery
Retrieved from "https://itsuperheroes.fandom.com/wiki/Danny_the_Street?oldid=4208"
Community content is available under CC-BY-SA unless otherwise noted.